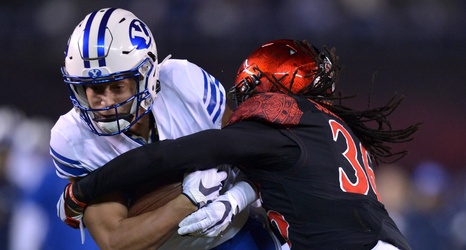 BYU football looked like its former self Saturday night in San Diego — as in its Toledo/South Florida former self — as the Cougars fell to the Aztecs 13-3 in a sloppy offensive display.

The first quarter was a defensive slug fest, with a Skyler Southam field goal the lone points at the end of the quarter. The field goal was set up by an Aleva Hifo punt return into plus territory before he tossed a double pass to Matt Bushman to get BYU inside the 10.

An interception thrown by Zach Wilson would set up a short field for the Aztecs to end the quarter deep in BYU territory.