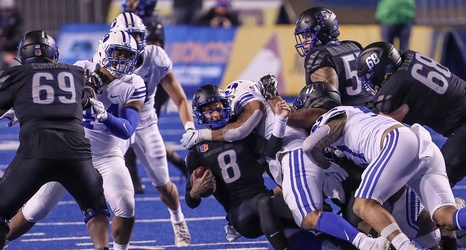 BOISE, ID - NOVEMBER 6: Quarterback Cade Fennegan #8 of the Boise State Broncos gets sacked during second half action against the BYU Cougars at Albertsons Stadium on November 6, 2020 in Boise, Idaho. BYU won the game 51-17. (Photo by Loren Orr/Getty Images)

BYU Football’s quarterback room has another face to it.

Cade Fennegan who played for Boise State last year and even played against the Cougars going 15 of 26 passes for 182 yards, two touchdowns and an interception has decided to join the Cougars after receiving a scholarship offer from the coaching staff.