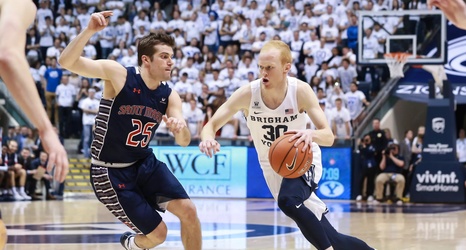 TJ Haws hit a go ahead three pointer with 8 seconds to lead BYU to a 81-79 win over St Mary’s in Provo. The Gaels had two looks at the end, but Jordan Ford’s runner was off and Zach Seljaas blocked the ensuing put back attempt just before the buzzer.

BYU led for most of the first half, but St Mary’s controlled the second half until BYU ended the game on a 6-0 run. St Mary’s forward Malik Fitts was unstoppable for much of the game, finishing with 29 points on 11-15 shooting. BYU forced Fitts into foul trouble and the senior forward fouled with just under 5 minutes to go in the game.