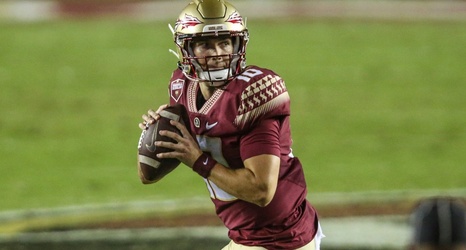 Florida State quarterback McKenzie Milton analyzing the defense before a snap in overtime against Notre Dame on Sept. 5. Photo courtesy of Associated Press.

On Sept. 5, with time running out in the third quarter, Florida State starting quarterback Jordan Travis had to be helped off the field due to injury. Despite being down by more than two scores, Florida State decided to bring onto the field their walking miracle — quarterback McKenzie Milton.

Over two years ago, Milton was the starter for the University of Central Florida and his incredible 34 passing touchdowns were the driving force behind the ninth-ranked team in the country.