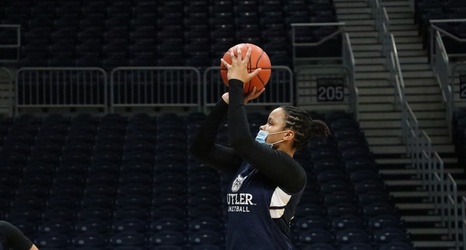 Butler Women’s Basketball guard Jaia Alexander attempts a jumpshot in practice this year. Alexander is returning this season from a leg injury that kept her out of play last season. Photo by Blake von der Lippe.

Jaia Alexander went up for a rebound during practice in mid-July of 2019. After Alexander came down hard on her knee, she continued playing on her injury for the next two to three weeks, not realizing how drastic the injury was.

Then, she found her knee swelling up. She described the aftermath of the injury as a “pothole” in her femur bone.