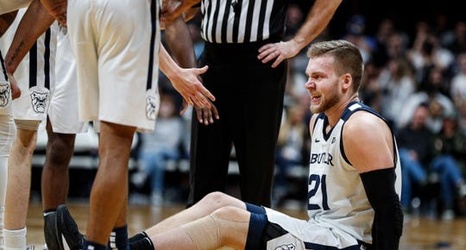 INDIANAPOLIS – The condition of Butler players Aaron Thompson and Derrik Smits is considered day-to-day, and neither has been cleared for Saturday’s basketball game against Georgetown at Hinkle Fieldhouse.

Both were injured during the second half of a 66-61 victory by the 20th-ranked Bulldogs over Xavier on Wednesday night.

Thompson, a junior point guard, was struck in the jaw, neck and head in a collision under the basket. He has concussion symptoms, Butler coach LaVall Jordan said.

Smits, a 7-1 transfer who missed much of the season with injuries to both knees, has swelling in one.