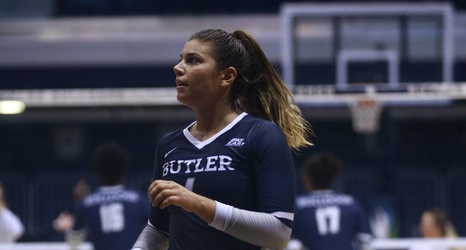 The Bulldogs competed in the Bowling Green Invitational. Megan Ramseyer has 32 assists in Butler’s loss to Bowling Green.

The Butler volleyball team lost three consecutive matches in Bowling Green, Ohio at the Hampton Inn Bowling Green Invitational on Sept. 6-7. The Bulldogs are now 1-5 on the season.

On Friday, the Bulldogs competed in two tough matches. In the morning, they battled Cleveland State University. The two teams traded off sets throughout the match with Butler taking the first and third, CSU taking the second and fourth, leaving it to the fifth and final set to decide a winner.