Butler men’s soccer vs. SIUE: Beyond the box score 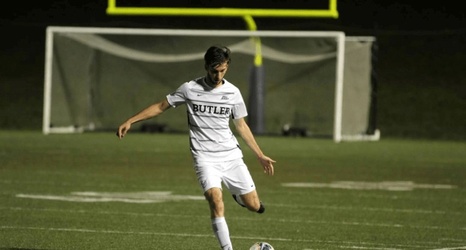 Griffin DeBolt kicks the ball in a match against Wisconsin. DeBolt scored his first collegiate goal in Butler’s 2-1 loss to SIUE. Photo by Chandler Hart.

The Butler men’s soccer team suffered a 2-1 loss at Southern Illinois Edwardsville on Sept. 17. The Bulldogs struck first on a corner kick when Jack Haywood connected with Griffin DeBolt in the eighth minute. From that point, the Cougars controlled the contest, converting an equalizer in the 60th minute and winning the game on a 109th minute goal at the end of the second overtime. We go beyond the box score of Butler’s second loss of the season.