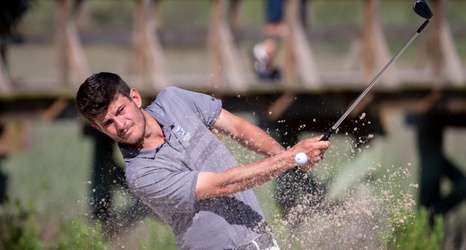 Logan Sabins hits a bunker shot during a tournament in the fall of 2019. Photo courtesy of Butler Golf on Twitter.

During Labor Day weekend the Butler Men’s Golf team traveled to Bloomington to play in the Hoosier Collegiate Invitational.

The tournament was hosted by Indiana University, played at the PFAU Golf Course, and hosted 15 different colleges for a two-day tournament.

The Bulldogs two-best performers for the tournament were Daniel Tanaka and Weston Guili — both playing in their first collegiate tournament.