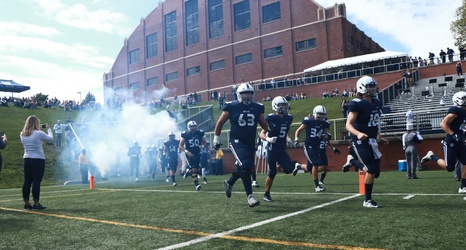 The Butler football team takes the field before a game during the 2019 season. Collegian file photo.

The Butler football team was victorious last night in their 49-24 win against the DePauw Tigers during their homecoming weekend and improved to 1-1. This is the team’s first win since November 2019.

On the opening drive, the Bulldogs set the tone for the game as quarterback Bret Bushka completed a 49-yard pass to wide receiver Yogi Flager that landed him in DePauw territory.

Five plays later, quarterback Nick Orlando rushed it over the goal line for a 1-yard touchdown.