Bulldogs end the season with a win against Marist 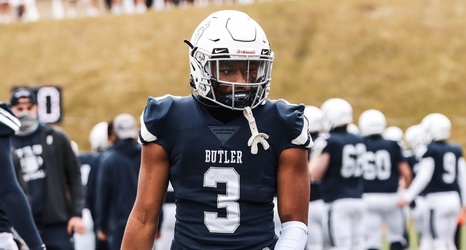 Junior defensive back Trey Mason prior to a home game during the 2021-22 season. Mason made a key interception to seal the Bulldogs’ 28-21 win over Marist. Photo taken by Chandler Hart.

Butler football defeated the Marist University Red Foxes 28-21 on Saturday, Nov. 20 to end the season at 3-8 with their first PFL win.

Butler rushed for 136 yards against Marist and was strong defensively, forcing a couple of turnovers and sacks.

Marist opened up the scoring with a touchdown pass from quarterback Austin Day to tight end Wyatt McMahon and led 7-0 with three minutes left in the first quarter.