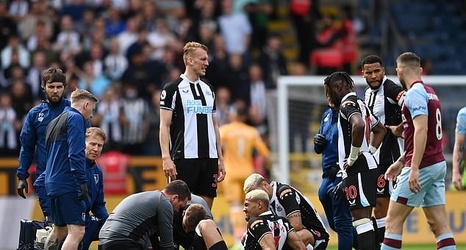 Newcastle United star Joelinton endured a premature end to his season after being carried off on a stretcher at Burnley.

Eddie Howe's side took on Burnley at Turf Moor on the final day of the season aiming for a top-half finish, and they got exactly that when Callum Wilson's brace earned them a 2-1 victory.

Though after a promising start to the game, things quickly turned sour for the Magpies when Joelinton went down after a clash with a Burnley player.

The accidental clash of heads occurred in the sixth-minute of the game and whilst his opponent escaped without injury, the Brazilian was not so lucky.