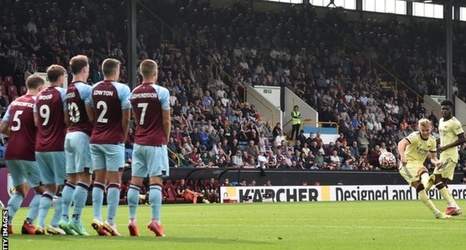 Martin Odegaard's sweetly struck free-kick earned Arsenal their second Premier League win of the season at the expense of Burnley, whose search for a first league victory of the campaign continues.

Odegaard curled home from the edge of the penalty area after Ashley Westwood had clipped Bukayo Saka's heels.

Referee Anthony Taylor awarded Burnley a second-half penalty for a foul by Aaron Ramsdale on Matej Vydra, but overturned the decision after reviewing the incident on the pitchside monitor.

The Clarets' best chance of the game fell to debutant Maxwel Cornet, whose close-range effort was palmed over the crossbar by Ramsdale.