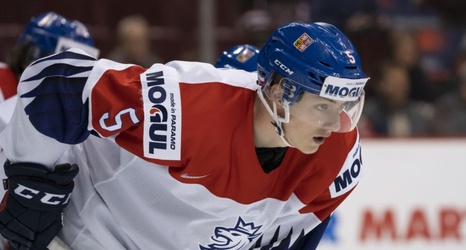 VANCOUVER, BC - DECEMBER 31: Matej Pekar #5 of the Czech Republic Group A hockey action of the 2019 IIHF World Junior Championship against Denmark on December, 31, 2018 at Rogers Arena in Vancouver, British Columbia, Canada. (Photo by Rich Lam/Getty Images)

The Czech 1.liga might not be the highest level of ice hockey in Czech Republic (it’s the second), but it’s where Buffalo Sabres’ prospect Matej Pekar is starting to show that he can produce at a high level.