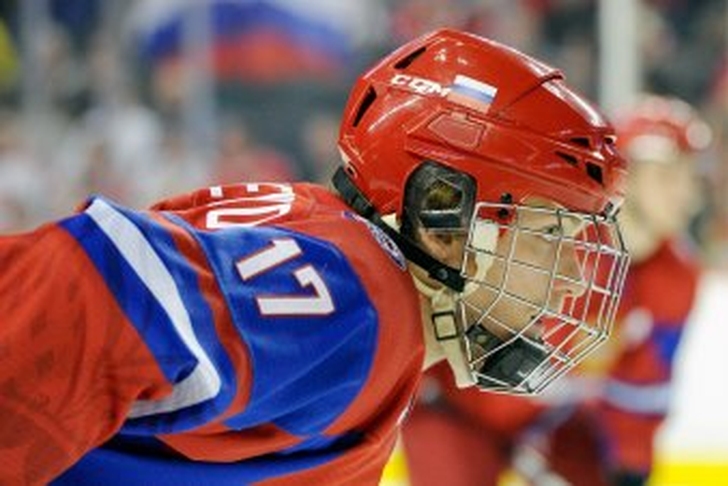 The Buffalo Sabres excited fans when they selected Russian forward Mikhail Grigorenko 12th overall in the 2012 draft. Instantly there was talk about him making the roster right out of training camp. Grigorenko flourished at development camp, but still fans wanted

and needed to seem more from him. At development camp there wasn't much "competition" for him, so it was easy for him to stand out.

But now he's getting some real competition battling it out in the 2012 Canada-Russia Series. A four game mini-series which pays tribute to the 1972 Summit Series. The best junior players from Canada and Russia come together to see who has the better young stars. The final game of the series will happen tonight, but through three games thus far Grigorenko has impressed.

The Sabres needed a big centreman who could put the puck in the net on a consistent bases, they got that with Grigorenko. In his rookie season in the QMJHL he racked up 40 goals and 45 assists in just 50 games. There were no arguments  about his ability to score goals, but there were questions about his defensive game and how quickly he'd be able to adapt. But so far through the Canada-Russia Challenge, his defence has been on display!

Grigorenko is playing on a line with #1 overall draft pick Nail Yakupov and the expectation for that line was to score goals, but they've surprised with their attention to defensive side of things.

"He's that two way player. With the Russians, we always hear about the high-end skill, and how good they are offensively, but the lynchpin of their system has always been the centermen being the link between offence and defence, and I think people in Buffalo, when they get a real consistent glimpse of Mikhail Grigorenko, they're going to be really impressed with how well he plays defence and how he plays a 200-foot game." ~TSN's Craig Button

After hearing those comments, I'm even more excited to see Grigorenko in blue and gold next season!

While it's been great to watch Grigorenko do all "the little things" to catch the Sabres attention, nothing gets the job done better than scoring goals. Russia has scored 12 goals through the first three games and Grigorenko is only credited with one assists. If he really wants to make a name for himself he will need to step up and score some goals Tuesday night.

Canada needs to win the game on Tuesday to have the series end in a tie. Two goals from Grigorenko could put the final nails in their coffin and solidify a win for Russia. Look for Grigorenko to step it offensively tonight!

What do you think, will we see Grigorenko wearing blue and gold on opening day?