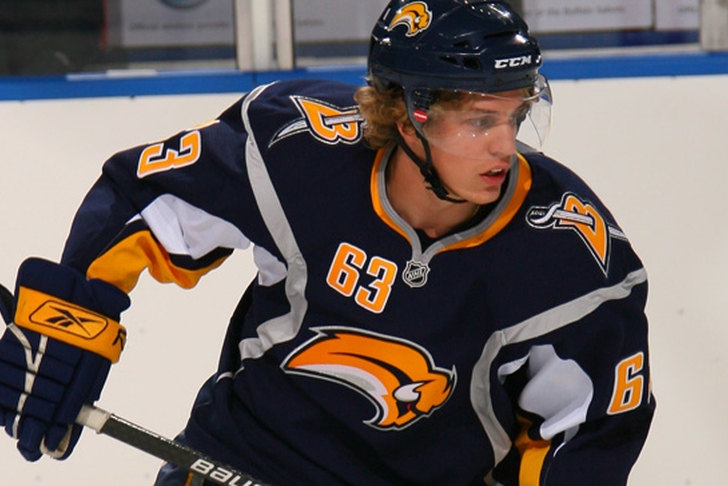 Every offseason the NHL brings out their 30 in 30. Which gives fans an "in-depth" look into all 30 teams in you guessed it 30 days. Today was the Buffalo Sabres turn, and the writers at the NHL took a stab at their version of what the opening night lineup will look like. But they forgot a few notable names, check it out.

A few notable names missing from the list. Luke Adam may have his final chance to make the team and stick on it before they burry him in the minors or look to trade him. He performed exceptionally well at development camp, his skating had drastically improved and you could tell when he was on the ice. When he centred Vanek and Pominville last season he did just fine. Why not give him another chance to find the chemistry he had with Pominville and Vanek? I wouldn't be surprised in the least if Adam was in the starting lineup on opening night.

were both left out of the lineup. While it is unlikely both draft picks start the year with the Sabres they is a strong chance one will. Both had solid performances at development camp and Girgensons really impressed management, performing better than they thought he would. Grigorenko has two options: Make the Sabres on opening night or go back to the QMJHL. I'd like to see him playing for the Sabres as he dominated last year in the QMJHL and likely wouldn't benefit much from another year anywhere other than the NHL.

The Sabres right now have an abundance of defenceman and will have a tough time cutting the list down to just seven. But a key defenceman not listed is Alexander Sulzer. Sulzer had a very decent season last year and made some great chemistry with Ehrhoff. There is no reason to think Sulzer will not be on the team to star off the year.

Let's say by some miracle that those are the players who will begin the year with the Sabres. Let's just tweak some of the lines a little bit.

Take Hodgson off the first line and move him to the third line with Leino and Ott. Ott does not want to play centre for the Sabres, he excels best when he's on the wing. Move him to the bring and get Hodgson to centre that line. Right now Hodgson isn't ready to be thrown into the role of number one centre. Last season was his first full year in the NHL and he's too young in his career for that pressure.

Unfortunately Adam was not included in this lineup which leaves a gap on the first line. Why not give Leino another chance to be the number once centre that the Sabres were expecting him to be? See if he can spark any chemistry between Pominville and Vanek and if the line works the Sabres are set.

Also keep Gerbe on the third line with Hodgson and Ott. So the new lines would look something like this:

Look for my post of what I believe the starting lineup will look like, in the coming weeks!