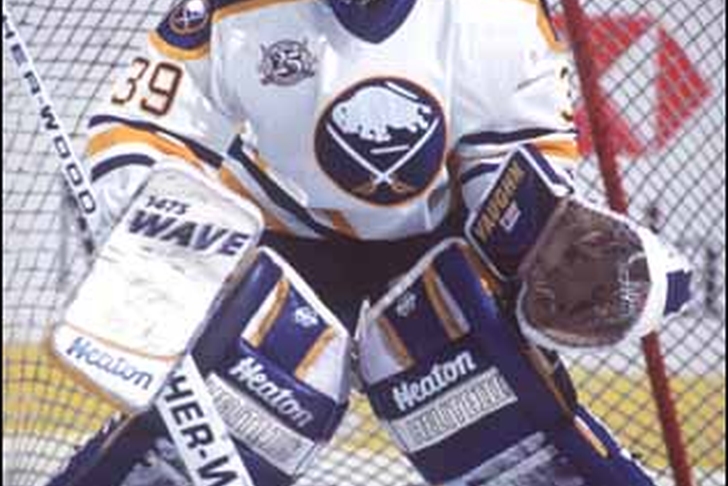 The great Dominator is attempting to make an NHL comeback as he believes he can still play. But Hasek can cross one of his former teams off his list, the Buffalo Sabres made it clear Thursday they have no intention on signing the former Sabre.

with the 47 year old goaltender out of respect for his career.

"Out of respect for Dominik and his career as well as with the Sabres, I met with him once, Lindy (Ruff) and I met with him as well, listened to him. We had our discussions internally and made him aware that we were going to proceed with our current goaltending unit." ~ Darcy Regier

The Sabres are not ready to give up on current back up goalie Jhonas Enroth. A huge boost of confidence for Enroth as his team was not willing to "hang him out to dry" to get their hands on one of the greatest goalies ever. The fact the Sabres are confident with their current back up and not willing to bring in arguably a better goaltender lends one to believe there are some plans for Enroth. After all he played fairly well during Ryan Miller's injuries last season and has respectable numbers for a back up goalie.

The Sabres strategy has been to give Miller less games during the regular season to keep him fresh for when (or if) the Sabres make the playoffs. Enroth has flurished in his role as the backup/relief goaltender. He plays well and the two goalies don't seem to have any controversy between the two. Why risk the harmony in the crease by bringing in Hasek who would likely demand more playing time?

While Hasek has been playing hockey over in the KHL he has been out of the NHL for two seasons. The KHL and the NHL are two completely different league and as of right now the NHL still is home to some of the best players on the planet. So who's to say Hasek would be able to jump right back into the league and play well? Any team that does land the legendary goaltender will have to be careful with the goaltending coach who will want to change his style to adapt to the new NHL.

Hasek was inspired watching New Jersey Devils goaltender Martin Brodeur take his team on a remarkable Stanley Cup run at the age of 40 and now Hasek want's that chance. What he is forgetting is the fact he is nearly 10 years older than Brodeur! While Brodeur was able to get it done during the stretch and in the playoffs he had a lot of rocky play last season and many people related it to his age. There is no guarentee his body can hold up and when things go bad people are going to relate it directly to his age.

Dominik Hasek asked the Buffalo Sabres for a chance to prove himself one last time, they said no. Where else could the dominator find a home?