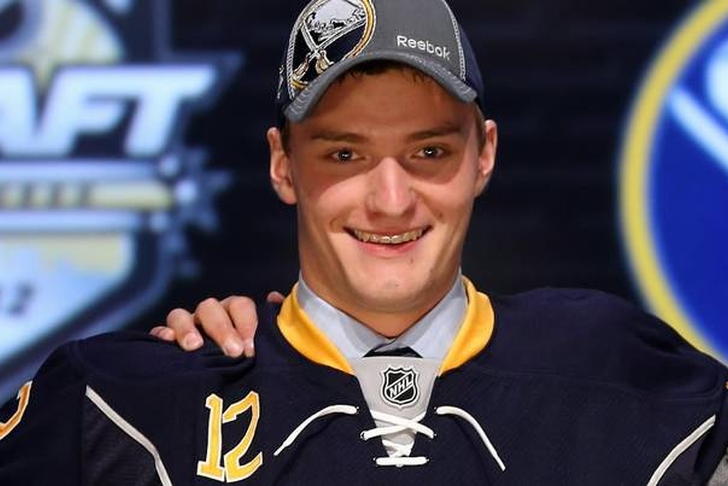 The NHL Entry draft has come and gone once again, only time will tell if the Buffalo Sabres discovered a true gem but it appears they drafted smart. They drafted big tall players that will benefit the Sabres now and were able to fix the hole at centre. By the time the draft was over the Sabres walked away with 8 draftees: 5 centres, 2 defenceman and a goaltender. Here is a break down of their picks.

near future, which is exactly what they got when selecting Mikhail Grigorenko. While many are still shocked he fell down to 12th the Sabres may have gotten the steal of the draft. Grigorenko's work ethic comes into question, but anytime you can get a player of his calibur and skill at 12th overall it's worth the risk. At 6'3" 200 pounds he is ready to play in the NHL, he may need a season or half a season in the AHL before he is fully ready to make the jump to the next level. But when Grigorenko is ready to make the jump we could see a clone of Evgeni Malkin.

Another very exciting pick by the Sabres, most importantly another big centre. If Grigorenko is the skilled centre that the Sabres were looking for than Girgensons is the tough physical centre the Sabres need. Girgensons is all heart, he gives it his all every night. He's the type of player his teammates want to go to battle with and for every night. In one game last season he broke his jaw after a hit but came back next period to continue battling with his team. He could turn into a inspirational leader for the Sabres almost like a Patrick Kaleta only more offencively gifted.

A 6 feet 203 pounds McCabe will be yet another menacing force on the Sabres blue line. He plays a solid 2 way game but it may be awhile before we see him up in the NHL full time.

Nelson is another gritty player, he's not flashy and put up big points like Grigorenko but he fights hard. A solid addition to the Sabres depth charts.

The Sabres draft a goalie, great another goalie to add to the depth charts. Behind Ryan Miller and Jhonas Enroth there are already 3 goalies battling for time in the AHL. It may be quite awhile if we ever do see Ullmark in the NHL for the Sabres. One of the better goalies from the Swedish Elite league, he will stay over in sweden to develop further before coming over.

This was a very interesting pick by the Sabres. Austin is a defenceman and thats what hewas drafted as, but he has spent time playing on the wing. He has developed his defencive game nicely over the last year and won the Most Dedicated Player Award for his play with the Belleville Bulls in the OHL. At 6'3" 234 pounds he brings the size that the Sabres seem to be interested in, he may be the complete defencive package and a good bargaining tool if need be.

Now when talking about a pick in the 7th round of the draft its rare to say that a team got a "steal" but it may turn out the Sabres did. Peterson is just a kid still in high school and many are saying he could have been drafted within the top 3 rounds in the 2013 draft. But with their last pick in the draft the Sabres took a risk and this risk may turn out well.

Only time will tell if the Buffalo Sabres were able to draft solid players, but the players they drafted have gotten fans excited for the future. With the addition of Grigorenko in the next couple years the Sabres could be a force to be reckoned with.