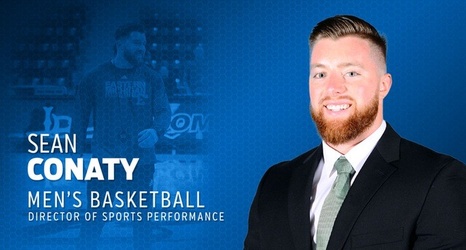 BUFFALO, NY – Former Eastern Michigan strength and conditioning coach Sean Conaty has been named the Director of Sports Performance for Olympic Sports. In his current role, he will also work day to day with the men's basketball and volleyball programs.

Conaty spent three seasons at Eastern Michigan where he worked directly with the men's and women's basketball programs as well as soccer and women's golf.

Conaty joined the Eastern Michigan sports performance staff after serving as the Assistant Strength & Conditioning Coach at Christopher Newport in Newport News, Va. While at CNU, Conaty was in charge of all aspects of strength and conditioning with men's and women's basketball, baseball, softball, men's soccer, women's lacrosse, men's and women's tennis, and assisted with football.