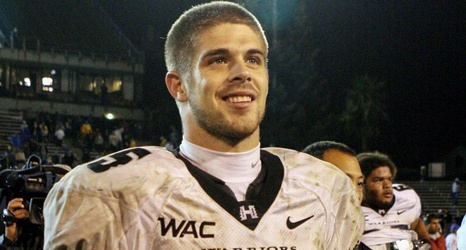 In 2006, Joel Sebastianelli was a 12-year-old college football fanatic in the small town of Johnston, Rhode Island.

And he was captivated by a record-breaking gunslinger who resided 5,068 miles away and rarely played a game that ended before midnight on the East Coast.

Sebastianelli and his buddies loved playing NCAA Football 07 for the chance to light up the scoreboard with the sport's most exciting team.

"Somebody always wanted to be Hawaii," he said.

But Sebastianelli took it a step further.

During the summer before the 2007 season, Sebastianelli saved his allowance and earned extra money by cutting neighbors' lawns.