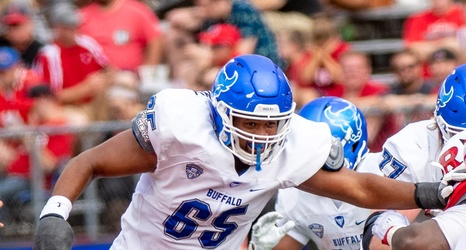 Tomas Jack-Kurdyla was a Buffalo pull from Canada, already in the 290’s when playing for Vanier College in Montreal, he was a solid addition to the 2016 recruiting class.

It didn’t take long for Tomas to to make a big impact on the offensive line. He played in 10 games, starting the last eight of the season. During tha eight game span the UB offense improved from 293 yards per game to 394 yards per game .

Jack-Kurdyla started every game of the season, and was named an CoSIDA Academic All-District, and Academic All-MAC team member.