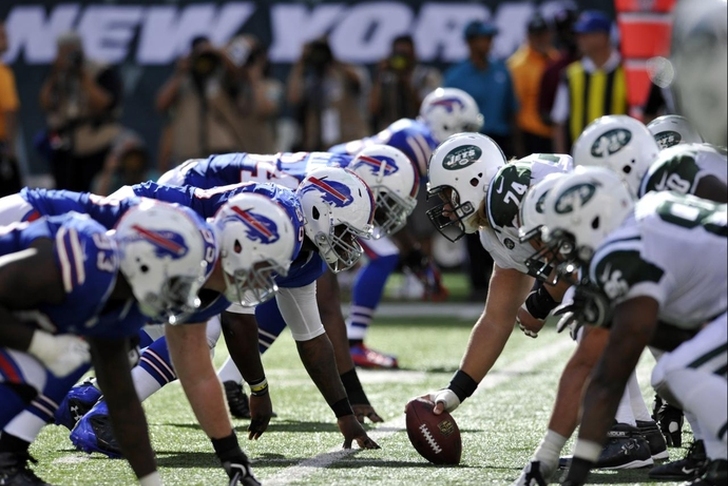 The 5-3 New York Jets host the 4-4 Buffalo Bills in a battle of AFC East foes on Thursday Night Football. It's also a revenge game for Bills' head coach Rex Ryan, as he goes up against his former team. Will the Jets pick up the win? Or will Ryan get his revenge and a Buffalo victory? Here's our preview and prediction.

The Jets and Bills are unlikely to catch the Patriots in the AFC East, but they are competing for a wild card berth. The winner of this game will be in great position to snag one of the two wild card spots. Expect the second place team in the AFC East to end up in the playoffs. This game will help determine the front-runner for that spot.

What They Are Saying About The New York Jets:

Foundation Of Jets' Defense Is Sagging

What They Are Saying About The Buffalo Bills:

Which running attack controls the game? The Jets and Bills both lean heavily on their ground game. The Bills are second in the NFL in rushing yards per game, while the Jets are 14th. New York hasn't run the ball as well in recent weeks as they did earlier this season. Both defenses are also great at stopping the run. The Jets have the league's top run defense and the Bills have the sixth best. It's a matchup of strengths, and whichever team is able to run the ball with success should pick up the win.

It's a low-scoring, hard-fought game, but the Jets pick up the win. There's no revenge for Rex Ryan, as the Jets' defense smothers the Bills' offense. Darrelle Revis shuts down Sammy Watkins, and the other WRs can't pick up the slack. The Jets' offense has limited success, but it's enough to pick up the win.