These Are 5 Players The Bills Could Cut This Offseason 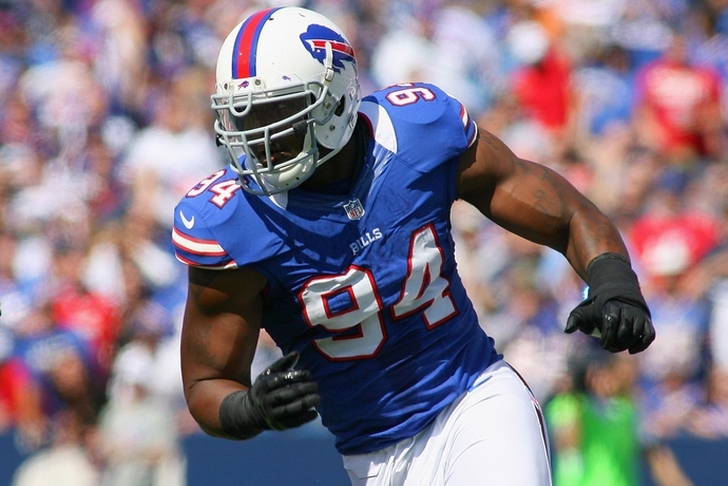 With the regular season over, the Buffalo Bills have turned their attention to the offseason. The team's first priority is re-signing its own players, and the Bills have several key contributors they need to bring back next season. The team also a few that could end up being cap casualties.

The Bills are actually over the cap limit by nearly $8 million, so the team will need to cut a few players and restructure some contracts. The Bills have a few players whose contracts don't match their level of play, and they are prime candidates to be released. With that in mind, here are five players the Bills could cut this offseason.

It would save the team almost $1 million in cap space. The Bills don't even need Dixon, as backups Karlos Williams and Mike Gillislee proved themselves last year. The issues surrounding LeSean McCoy could give the Bills pause, but Dixon is a luxury they don't need and can't afford with their current cap situation.

This Williams is a much tougher call for Buffalo. He played okay last season, but Corbin Bryant (not to mention Marcell Dareus) was better and is much younger. Cutting Williams would save the team $5 million in cap space this season, but it would mean the Bills need another defensive lineman to put in the rotation. But given the savings involved that Williams is 33, it might be time for Williams to find a new home. For more Bills coverage, download the Chat Sports Android and iPhone app.

Cutting Carpenter will only save the team nearly $1.8 million, but Rex Ryan didn't exactly guarantee that Carpenter would be back next season. Carpenter missed six extra points last season, much to the ire of Ryan. Carpenter has a $250,000 roster bonus that kicks in seven days after the start of the league year in mid-March. If he's not cut by then, expect Carpenter to at least make it the preseason. Either way, the Bills could look to add competition for Carpenter this offseason.

Williams is a close second, but this is the toughest cap call the Bills will make this offseason. McKelvin is not the same player he once was, in part because of injuries. The Bills have younger players in Ronald Darby and Stephen Gilmore, who both played well last season. The team might even move him to safety if he stays. Cutting him would save the team almost $4 million and it's something the team will consider. Perhaps McKelvin can take a pay cut, something he's open to doing. Either way, don't expect McKelvin to return to Buffalo next season at his current salary.