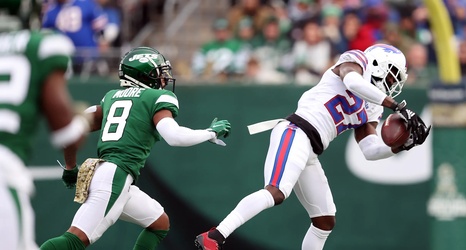 Buffalo Bills cornerback Tre’Davious White laced up his cleats for the second time this season in Week 13 against the New England Patriots. He saw twice the amount of snaps compared to last week, logging 33 snaps (61%). He posted four total tackles and defended one pass. Let’s take an All-22 look into how he played in Buffalo’s 24-10 victory on Thursday Night Football.

White gives up a completion

The Bills bring a blitz on this play, leaving White one-on-one with the wide receiver. He knows he’s on an island and his help is inside, so he naturally gives cushion and backpedals slightly outside.