Could the Buffalo Bills be interested in Dee Ford? 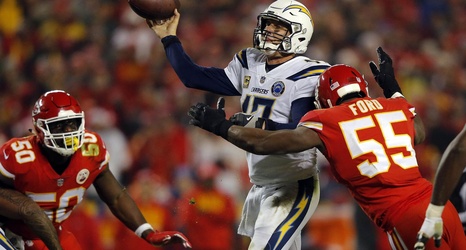 Despite a 6-10 record, the Buffalo Bills finished as the No. 2 defense in the NFL last year in total defense (yards allowed per game), the team’s first top five finish since the 2014 season.

One area where the Bills and defensive coordinator Leslie Frazier could improve in 2019 is the pass rush. Buffalo finished 26th in the NFL in sacks last year with 36, 16 sacks behind league-leaders Kansas City and Pittsburgh.

Jerry Hughes was one of the highest-rated pressure ends in the league according to Pro Football Focus, and finished with a team-high seven sacks and a career-high three forced fumbles.