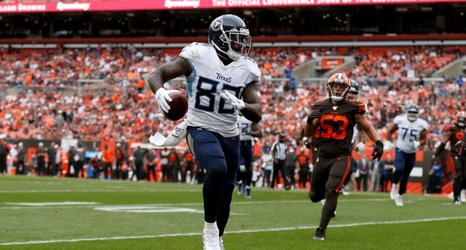 CLEVELAND, OH - SEPTEMBER 8: Delanie Walker #82 of the Tennessee Titans runs the ball into the end zone for a touchdown during the fourth quarter of the game against the Cleveland Browns at FirstEnergy Stadium on September 8, 2019 in Cleveland, Ohio. Tennessee defeated Cleveland 43-13. (Photo by Kirk Irwin/Getty Images)

As free agency nears there are a lot of roster construction decisions yet to be made by the Buffalo Bills. According to Bills fans, the tight end position needs to be addressed this offseason. However, I would urge Bills mafia to pump the breaks a little bit on the idea to completely move on from Dawson Knox.