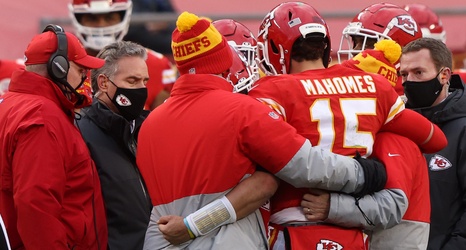 KANSAS CITY, MISSOURI - JANUARY 17: Quarterback Patrick Mahomes #15 of the Kansas City Chiefs is assisted off the field after an injury from a sack that would remove Mahomes in the third quarter of the AFC Divisional Playoff game against the Cleveland Browns at Arrowhead Stadium on January 17, 2021 in Kansas City, Missouri. (Photo by Jamie Squire/Getty Images)

The Buffalo Bills will be playing in the AFC Championship Game for the first time since 1994 and will be playing the Kansas City Chiefs. The Bills advanced to this game after a 17-3 win over the Baltimore Ravens on Saturday night while the Chiefs earned their trip on Sunday after a 22-17 win over the Cleveland Browns.