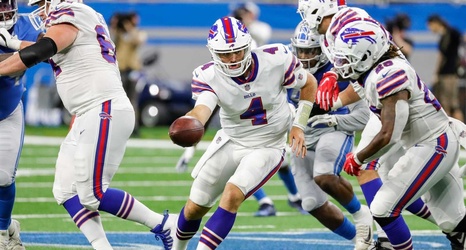 Buffalo Bills quarterback Jake Fromm (4) hands off the ball to running back Antonio Williams (28) during the second half of the preseason game at Ford Field in Detroit on Friday, Aug. 13, 2021.

The Buffalo Bills announced their initial practice squad Wednesday for the 2021 season. The group included a number of familiar names.

The players that were added on the offensive side of the ball were quarterbacks Davis Webb and Jake Fromm, running back Antonio Williams, offensive linemen Jack Anderson and Jamil Douglas, wide receivers Tanner Gentry and Isaiah Hodgins, tight end Quintin Morris.