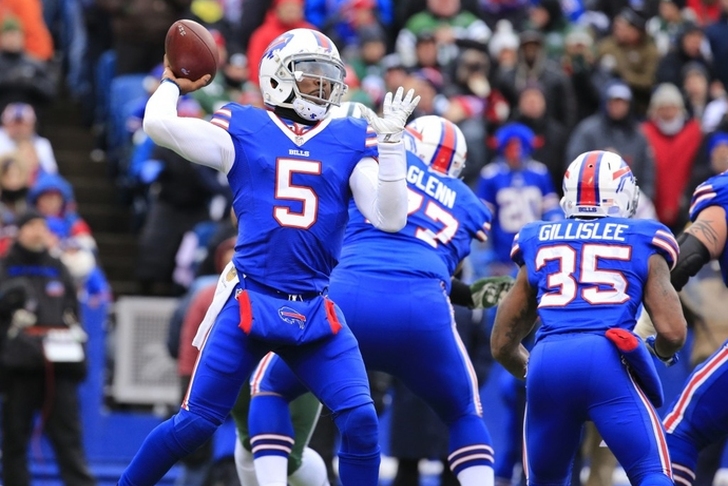 The Buffalo Bills announced they have signed quarterback Tyrod Taylor to a contract extension, and Joe

It's a done deal. We've signed Tyrod Taylor to a contract extension!

Tyrod Taylor’s 6 year deal could be worth more than $100 million, per NFL source

Taylor surprisingly beat out E.J. Manuel and Matt Cassel to win the starting job in his first year in Buffalo last season. He passed for 3,035 yards and 20 touchdowns with just six interceptions in 14 games for Buffalo, along with racking up 568 yards and four touchdowns on the ground.

“The thing that I knew about him was his work ethic and his passion for the game and obviously his God-given ability,” head coach Rex Ryan said. “That was what I knew we were getting, but you never know how it’s going to be until a guy really gets out there and he’s the guy under center. Nothing was given to him. He came here, and he earned the starting job, so it was all him.”

“In order to take those steps it has to come from the player,” saidRoman. “The player has to embrace the challenge of self-examination, self-awareness. He has done that A-plus, plus. I couldn’t be happier with his commitment to that process. He’s improving in every aspect of his game. I’m very happy with how he approaches his job.”

“Last season Tyrod was at the facility at 6:15 every morning,” Lee said. “He was out at 7:30 at night. He knows how to prepare, and that’s going to pay off. If a quarterback didn’t prepare that way with all of those hours like he does, he’s going to be lost for the game. It’s a necessity if you’re going to be a good, starting quarterback. I mean really good, and he’ll do it. He works his tail off. You couldn’t ask for more.”

Taylor was scheduled to make just $2 million this season.

Prior to signing with the Bills, Taylor spent four seasons as Joe Flacco's backup with the Baltimore Ravens.