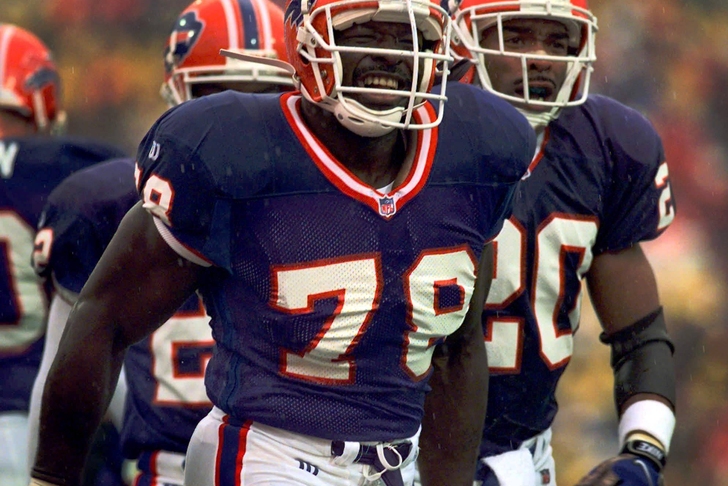 The Buffalo Bills may have fallen on some tough times as of late, but the franchise has boasted some exciting impact players during its 55 year history. Here are the 8 best players in Bills history:

Although Cornelius Bennett was drafted by Indianapolis and played his final season there, he spent nine seasons in Buffalo during his career. With the Bills, Bennett racked up 52.5 sacks, 751 tackles and made five Pro Bowls while starting 128 games as a defensive anchor for four straight Super Bowl teams.

Steve Tasker was technically a wide receiver, but his impact came on special teams, where he helped redefine the position. Tasker made seven Pro Bowls thanks to his special teams prowess. He was second in yards per return in 1985, where he finished with over 26 yards per kickoff return.

Joe DeLamielleure helped pave the way for O.J. Simpson for most of the '70's, spending eight years as the anchor of the Bills offensive line. DeLamielleure made six Pro Bowls, five of which came in Buffalo, and was elected to the Hall of Fame in 2003. Thurman Thomas came into the league about 10 years too late to have DeLamielleure blocking for him, but that didn't seem to bother Thomas, who finished as the leading rusher in Bills history with 11,938 yards. A 2007 Hall of Fame inductee, Thomas finished in the top six of rushing yards for six consecutive seasons between 1989-1994.

While Buffalo has had a number of stellar running backs in their history, Andre Reed tops the less impressive list of receivers, however he is head and shoulders above any Bills wideout. Reed's 941 receptions, 13,095 yards and 86 touchdowns are easily the most in team history. Eric Moulds is the next closest in all three categories with 675 - 9,096 - 48.

His off-field controversy aside, O.J. Simpson could really play football. Simpson is the second leading rusher in team history, and eclipsed 2,000 yards during his 1973 season. Simpson had four 1,200 yard or more seasons at running back, leading the NFL in each of those seasons. A six time Pro Bowl selection, Simpson was inducted into the Hall in 1985.

Jim Kelly cemented his place at the franchise's best quarterback all-time, as Kelly finished atop every passing category in team history. Kelly is also the only quarterback to take Buffalo to a Super Bowl, doing so in four consecutive seasons from 1990-93. Perhaps his only downfall was never winning one of them, but Kelly's other career marks may be difficult for any Bills quarterback to overtake.

The best player in team history, and one of the best players in NFL history, Bruce Smith dominated as a defensive end, recording a ridiculous 171 sacks with the Bills. His 200 total sacks ranks first in NFL history. Smith made 11 Pro Bowls, eight First-team All Pro's and was inducted into the Hall of Fame in 2009 as one of the best defensive forces the game has seen.