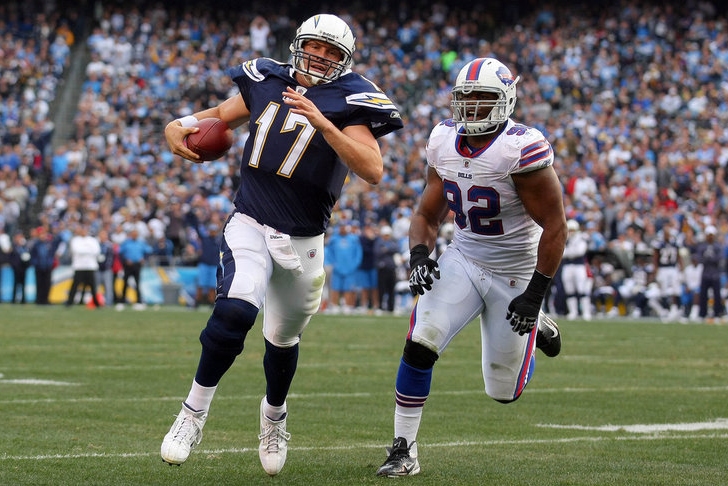 5. The Bills Shot Themselves In The Foot With Penalties

Eleven total penalties cost Buffalo over 100 yards, and that just isn't acceptable no matter how tight the refs are calling it. The flags killed momentum, ended promising drives for Buffalo and helped San Diego extend their own.

4. EJ Manuel Isn't There Yet

Manuel was okay today, but struggled with his accuracy. His fifteen incompletions on the day weren't all his fault, but some were the result of missed reads and iffy throws. The potential is there, but Manuel is clearly still putting the pieces of the puzzle together.

No Bills player ended up with more than 35 rushing yards, and that just isn't enough no matter who you're playing against. CJ Spiller's 25 yards on 10 carries stand out - he and the offensive line have major work to do before next weekend's game against

The last time the Chargers got blown out? You have to go all the way back to 2012, and there's a very good reason: Philip Rivers. Rivers has a contagious competitive fire that rubs off on teammates, and it means that no matter how much talent the Chargers have on the field, they can punch above their weight. Rivers has a highly underrated supporting cast in 2014, and it'll be fascinating to see how far he can take them.

1. Take The Chargers Lightly At Your Own Risk

It's early, but San Diego looks like they could be a major threat to the Broncos in the AFC West. The season is young and we'll know more in a few weeks, but the Bolts have shown no real weaknesses over their last two games.