Bills Rumors: 5 Possible Replacements For Doug Marrone If He Is Fired As Bills Coach 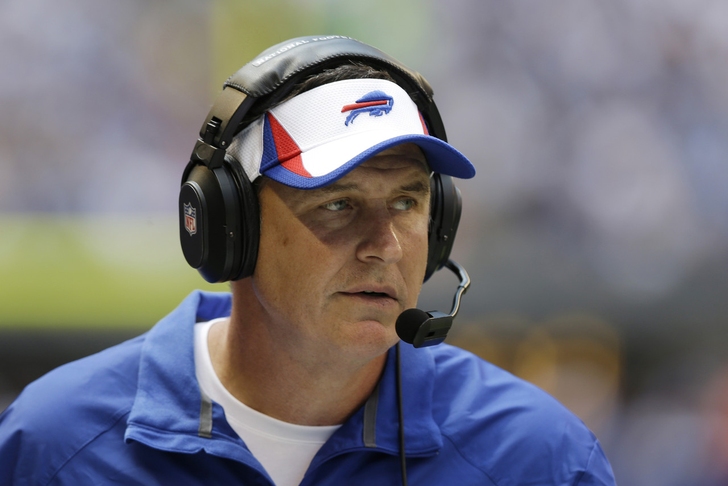 The Buffalo Bills were officially eliminated from playoff contention with a loss to the Oakland Raiders, but the team will still have their first non-losing season since 2004. Despite the recent success, second year head coach Doug Marrone might find himself on the way out as rumors swirl that new Bills ownership group wants to implement their "own" coach. If that's the case, who are they most likely to turn to?

McDermott is a rising star in the coaching ranks, who already has 16 years of NFL coaching experience – including six as a defensive coordinator – at the age of 40. He’s the architect that has built and maintained Carolina’s top defense while being there since 2011, and received interest from multiple teams last year about their head coaching vacancies. McDermott would keep the Bills centered around their defense, and would be a nice consolation prize if the big names listed above pass on the job.

Bowles has quietly constructed one of the league’s best defenses in Arizona, and they haven’t missed a beat despite losing several starters to injuries this season. He has some head coaching experience, as he served in the interim role in Miami after the Dolphins fired Tony Sparano in 2011, and he’s one of the rising stars in the NFL coaching world. McDaniels has rebuilt his reputation while leading the Patriots’ offense for the past three seasons after a less-than-successful head coaching debut in Denver. He doesn’t have any connection to the Bills, but he does have a strong desire to be an NFL head coach again. Buffalo has a talented young roster already assembled, which would be very appealing to McDaniels.

Malzahn’s inventive offense took a 3-9 Auburn team to the national championship game the very next year, and with Chip Kelly’s offensive success in Philadelphia, Malzahn is becoming a hot candidate to make the jump to the pros. There’s no guarantee that he’ll want to leave Auburn and the college game so soon, but a NFL job with Buffalo's offensive talent level will be hard to pass up.

The Bills offense need a someone who can get them out of their season-long malaise. Bevell has turned down NFL head coaching jobs before to stay in the Pacific Northwest, but he’s expected to make the jump this offseason if the right opportunity presents itself. Buffalo has been a messy operation on that side of the ball this year, but the right directive and influx of energy could have this team playoff-bound next season – and Bevell could be the man to take them there.