5 Players The Bills Could Sign To Replace LeSean McCoy 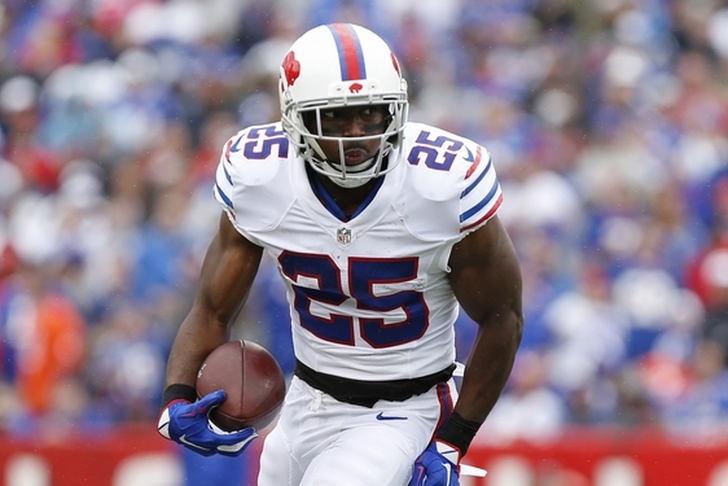 The Buffalo Bills lost to the Washington Redskins 35-25 Sunday, ending their playoff hopes in the process. The team also lost RB LeSean McCoy to an MCL injury and he may be done for the season.

With the Bills out of the playoff race, there's no reason to risk further injure to McCoy. He's "week-to-week," so the team might as well place him on injured reserve and avoid the possibility of McCoy damaging his knee even more. The Bills have Karlos Williams, Boobie Dixon and Mike Gillislee on the 53-man roster. However, Dixon has just four carries in his last nine games and Williams isn't 100 percent because of a shoulder injury.

If the Bills place McCoy on IR, they will likely sign a replacement. The Bills have no running backs on their practice squad. With that in mind, here are five players the Bills could sign to replace LeSean McCoy.

Every time an NFL team has needed an RB this season, Rice's name pops up. I'm not a big fan of his, because I think he's washed up as a running back. In his last season with the Ravens, he put up a meager 3.1 yards per carry. He's a 28-year-old RB who hasn't played recently, so there is cause for concern. However, don't be surprised if his name comes up, especially among fans.

Tate hasn't played in an NFL game since last season, but he still has some talent. He did get a workout with the Chiefs when Charles went down, so he's at least on the minds of NFL teams. There is no harm in bringing him for a workout and seeing what he has left.

Ball didn't make the Broncos' roster, but still has some talent. He recently joined the Patriots' practice squad, so he's still in playing shape. Given Rex Ryan's hatred of New England, this could present a chance for him to upset Bill Belichick.

This is an intriguing, albeit unlikely option. Archer is a bit of 'tweener, having served as a WR and RB for the Steelers. However, the team cut him and Archer has passed on 10 practice squad offers since. He's incredibly fast and OC Greg Roman could find a few ways to get him the ball in space.

Pead was with the Pittsburgh Steelers after Le'Veon Bell went down, but the team cut him near the end of November. He's a former second round pick, but he's been a bust in his four NFL seasons. The Rams cut him after just two games this season. Still, Pead has some talent and is worth checking out for a few games.