4 Reasons Why The Buffalo Bills Will Make The Playoffs 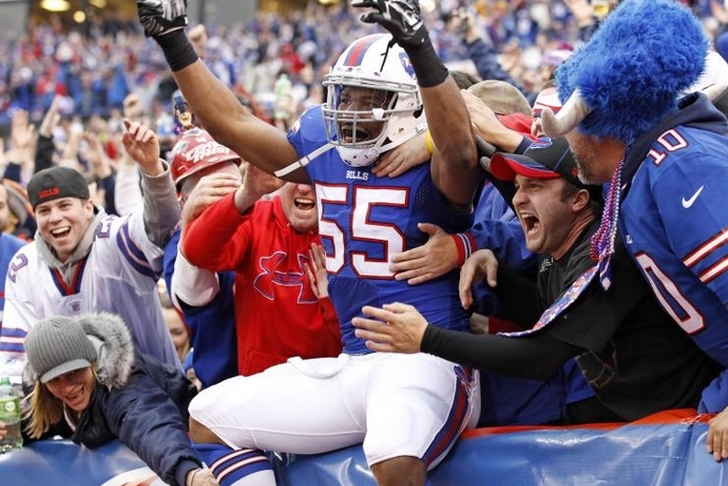 What's the best way for Rex Ryan and the entire Buffalo Bills organization to shake off the doubters for once and for all? End their decade-plus long playoff drought. .

You take a top-five defense full of players who still haven't reached their full potential yet and you add a defensive mastermind like Rex Ryan? This isn't just the best defense in the AFC East. A perfect combination of talent, attitude and coaching vision makes this the best defense in the entire NFL. Yes, you heard that right Seahawks fans. The Bills will have the best D-unit hands down in 2015.

Whether it's Matt Cassel, EJ Manuel or someone else under center to open 2015, they'll have plenty of ammunition at the skill positions to play with. LeSean McCoy is one of the greatest dual-threat running backs of this or any era, and both Percy Harvin and Charles Clay have fantasy breakout written all over them. Oh yeah, and there's also Sammy Watkins. This is the best offensive arsenal that Rex Ryan has ever had at his disposal. He'll make good with it.

3) Opportunity in the division The division has been praised this offseason for the defensive additions each team made, but the Bills have improved their roster the most. New England won't have Tom Brady for the first four games and will have to totally revamp their defense, while the Jets still have no idea who's playing quarterback for them and the Dolphins have choked in recent years. If Buffalo can go 5-1 in the division, they'll make the playoffs easily.

For all the derision Ryan faces from members of the national media, there's no doubting what he gets out of guys who fully buy into his system. Out of the bright lights and ego-stroking of the Broadway sports tabloid cycle, Ryan will have a fantastic chance to put his imprint on a blue-collar franchise full of rising stars and proven veterans. Just watch him work his magic in 2015. You won't be disappointed.

Follow our Buffalo Bills team page for the latest Bills news and rumors!