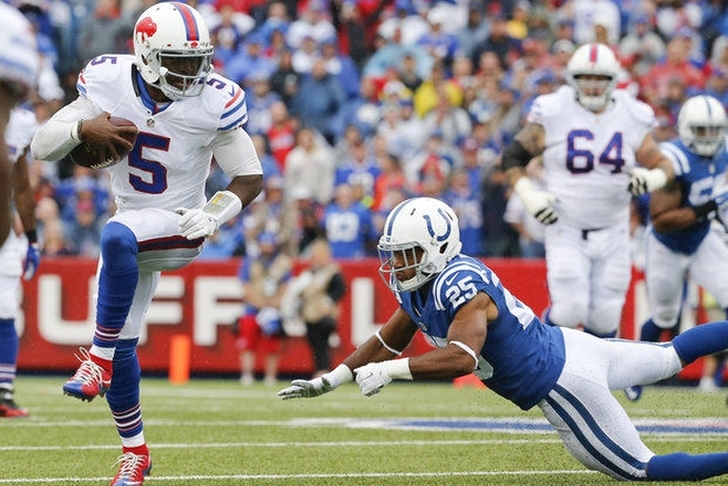 The Buffalo Bills surprised much of the NFL with a 27-14 over the Indianapolis Colts, and they'd love nothing more than to keep that momentum going against the Patriots in Week 2. Here are three reasons why they'll knock off the defending champs on Sunday:

Rex Ryan and offensive coordinator Greg Roman had an excellent game plan against the Colts, and they'll come up with a great one for the Patriots again.

Roman made things as easy as he could on QB Tyrod Taylor, letting him use his feet and make some easy throws early to build his confidence. They ran the ball 36 times against just 19 passes, and that will likely be the case again with LeSean McCoy and Karlos Williams exploiting a suspect New England defense.

On defense, Ryan will bring pressure up the middle all afternoon - which Tom Brady hates - and  will rely on his outside linebackers to keep Brady in the pocket. It worked against the Colts has luck threw two interceptions, and it should work against against New England.

Buffalo's defense was incredible against the run against Indy, allowing just 44 yards on 13 carries. That will turn make the Patriots' offense extremely one dimensional, making them more predictable and that much easier to defend.

With such a great defense and weapons on offense, the Bills don't need Taylor to play like a superstar - just don't turn the ball over and make a few plays throughout the game. He did that against the Colts, completing 14 of 19 passes for 195 yards and a touchdown while throwing in 41 yards rushing. If he can repeat that performance, Buffalo will be in great hands.