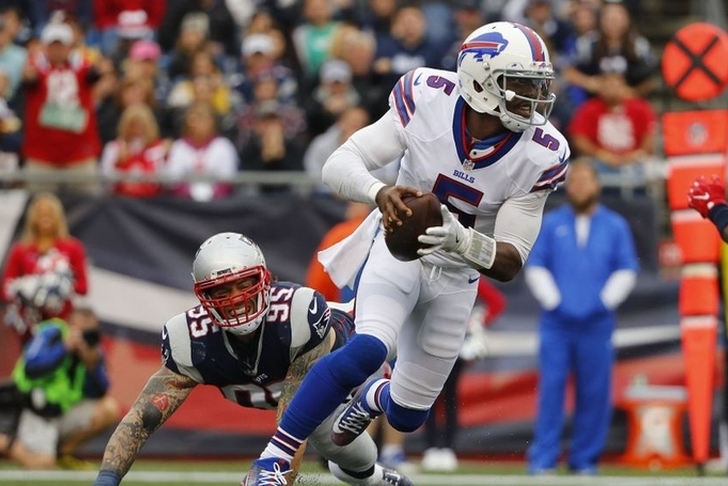 The Buffalo Bills are right in the thick of the playoff race with a 4-3 record, and now they get to host the Patriots for their second matchup of the season. While the Bills are the underdog, there are plenty of reasons to believe that they can pull off the upset. Here's why Buffalo will beat New England (again):

3) Buffalo's dominant rushing attack
One way to beat the Patriots is to control the tempo and pace of the game, and the easiest way to do that is to run the ball well. The Bills have one of the best rushing attacks in the league, ranking second in the league in yards per game on the ground. Their attack gives any defense fits - including the Patriots in their last matchup - and that will be the case again this weekend.

2) Hurting Patriots
There's a good chance the Bills will be without running back LeSean McCoy in this one due to hamstring injury, but New England is dealing with several key injuries of their own. TE Martellus Bennett (ankle), WR Julian Edelman (foot), DT Woodrow Hamilton (shoulder), CB Jonathan Jones (hip), WR Malcolm Mitchell (hamstring), LB Elandon Roberts (ankle) and DT Vincent Valentine (back) are all questionable to play in the game, and if they do play, they will be limited by their various ailments.

1) Bills defensive plan
For as dominant as the Patriots have been this season, Buffalo is the only team that has developed a defensive plan that has slowed New England's attack down. Yes, New England didn't have Tom Brady in their first matchup, but the Bills kept New England off the scoreboard entirely - and they were averaging 27 points per game coming into that contest. Buffalo won't pitch another shutout against Brady, but head coach Rex Ryan has shown he knows how to at least limit New England's offensive system.