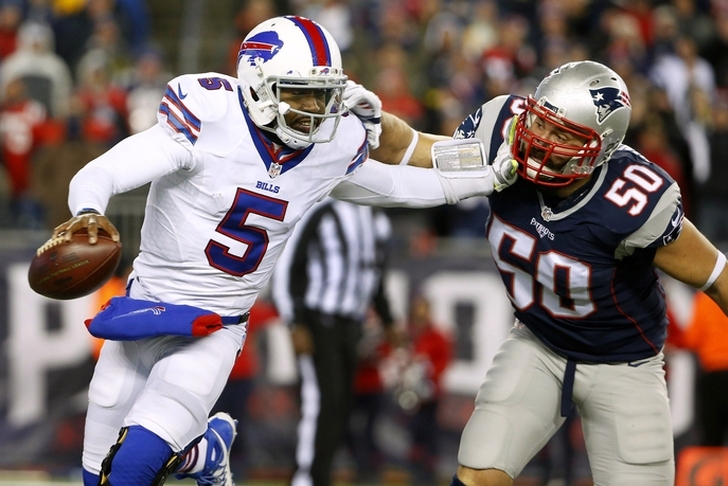 The Buffalo Bills got off to a disastrous 0-2 start to the season, but got things turned around in a big way with a dominant win over a very good Cardinals team. Now comes a date with the undefeated (and hated) Patriots. While the Bills are the underdog, there are plenty of reasons to believe that they can pull off the upset. Here's why Buffalo will beat New England:

3) New England's quarterback questions
Yes, the Patriots get Jimmy Garoppolo back and yes, he's undefeated as the starter, but he is still dealing with a shoulder injury that could limit his ability to throw the ball down the field, taking a chunk of New England's playbook out of the gameplan. It also means that the Bills can play aggressive and close to the line of scrimmage due to his inability to drive the ball down the field. Plus, it is just his third game as a starter, and you better believe Rex Ryan will have plenty of exotic blitzes and coverages to confuse him.

2) Dominant rushing attack
One way to beat the Patriots is to control the tempo and pace of the game, and the easiest way to do that is to run the ball well. The Bills have one of the best rushing attacks in the league, ranking in the top 10 in yards per game on the ground. Tyrod Taylor and LeSean McCoy are a very dangerous two-headed monster in the backfield that give any defense fits, as will be the case again this weekend.

1) Added motivation
We don't need to remind you about Buffalo's struggles in New England. Not only do the Bills have extra motivation to end the streak, they know that falling into a 1-3 hole virtually kills their realistic playoff chances - something Ryan needs to make in order to keep his job. The Patriots are playing with house money, as everyone thought it'd be a HUGE success if they went 3-1 (or even 2-2) without Tom Brady. Because of that, look for the Bills to play with the extra edge you need to win a game like this.