3 Reasons The Bills Are GUARANTEED To Beat The Jaguars 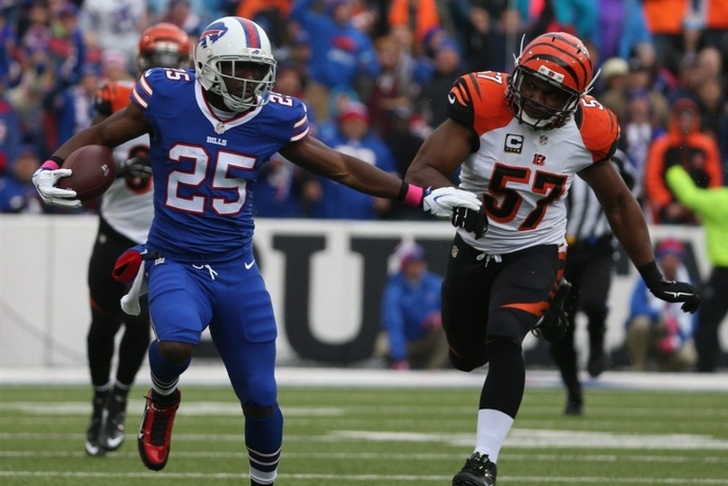 The Buffalo Bills and the Jacksonville Jaguars face off in London Sunday Morning, in an AFC battle. The Bills are 3-3, fresh off a loss to the Cincinnati Bengals. The Jaguars are 1-5, losers of four straight. Only one team will walk away with a victory and it will be Buffalo. Here are three reasons why the Bills are GUARANTEED to beat the Jaguars this weekend.

LeSean McCoy returned to the Bills last week against the Cincinnati Bengals after missing two games. Against a solid Bengals' run defense, McCoy racked up 90 yards and a score on 17 carries. McCoy should be even better this week. Expect McCoy to get at least 20 touches, as the Bills lean heavily on him, with a few assists from either QB E.J. Manuel or QB Tyrod Taylor. McCoy can, and will, carry the Bills to a win this weekend.

The Bills gave up at least 30 points to both the Bengals and Patriots, but both those teams have great offenses. The Bills have shut down other teams, limiting the Colts, Dolphins and Titans to 14 points or fewer. Expect a similar performance against a Jaguars' offense that has scored 24 points or fewer in all but one game this season. The Jaguars won't be able to score more than 14 points and the Bills will leave the UK with a win.

The Bills have their issues, as Taylor might not be able to play and it looks like both Sammy Watkins and Percy Harvin will be out this weekend. Even with a limited roster, the Bills are better than Jacksonville because the Jaguars simply aren't very good. The Jags lone win came against the Miami Dolphins in a 23-20 contest. The Bills beat the Dolphins one week later, 41-14. The Jaguars lost to the Colts 16-13, despite the Colts not having Andrew Luck. The Bills beat the Colts 27-14 to start the season. Jacksonville was blown out by the Patriots, while Buffalo barely lost. The Jaguars couldn't beat the Buccaneers or the Texans, two of the worst NFL teams. All of that adds up to the Jaguars not being a good team. The Bills aren't the best team in NFL, but they shouldn't have any issues defeating the Jaguars this weekend.