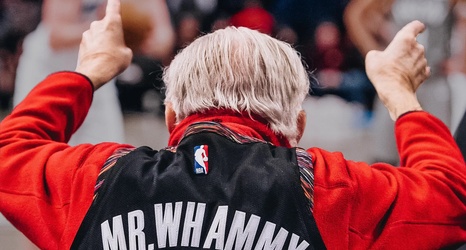 Two days back, the Nets posted some numbers, with the aid of Mr. Whammy, aka Brooklyn lawyer Bruce Reznick, on the Brooklyn octogenarian’s effect on opponent free throw shooting. Bottom line: It is now a scientific fact worthy of an entry on Basketball Reference. Bruce Reznick’s hex — finger pointing accompanied by distracting jumps — works!

The league average as of Tuesday for opponent free throw shooting on the road was 78.9%, but at Barclays Center it’s eight points lower: 70.3. And as Whammy points out, that’s No. 1 in the NBA, beating out Wells Fargo Center in Philly (73.