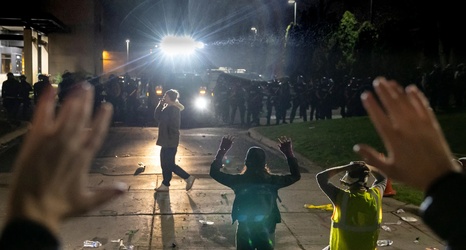 The NBA has postponed tonight’s Nets-Timberwolves game as Minneapolis faces new tensions after the police killing of a 20-year-old black man in the suburban Brooklyn Center. The killing, which has already spurred widespread protest in the region, comes as the defense opens in the trial of Derek Chauvin, the police officer who kneeled on George Floyd’s neck and killed him last year.

The news was first reported by Shams Charania and Adrian Wojnarowski who also suggested the Nets would stay over in Minneapolis and play the T’Wolves on Tuesday if conditions improve. The Nets are already in the Twin Cities and planned to fly out post-game Monday to Philadelphia where they play the 76ers on Wednesday night.