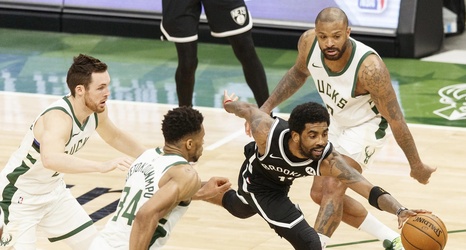 The stakes were high in the potential playoff preview and Milwaukee capitalized. Brooklyn did not.

The Nets suffered their third straight loss, losing to the Bucks, 124-118. With the loss, it’s not just a loss for the books (43-23). Brooklyn, which lost to the Bucks Sunday, has now dropped the season series and has lost the tiebreaker in a potential future playoff matchup. It was another nail-biter down the stretch.

The Nets entered the final 12 minutes of play leading by two and built a six-point lead before Milwaukee took control. The Bucks, behind aggressive drives and dominance down low, forged an 18-1 run - 15 of which came in the paint - to balloon their lead to nine points with 4:40 remaining.