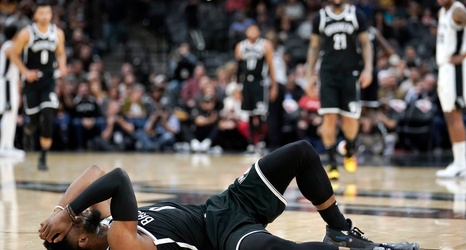 SAN ANTONIO — When David Nwaba crumpled to the court late in Thursday’s 118-105 loss to the Spurs, he took the Nets defense with him.

Nwaba suffered what the team confirmed to be a right Achilles tendon injury, a horrible blow to the 24-year-old wing — and to the Nets.

Nwaba had been playing through a sprained right ankle. But the news on the team’s newfound defensive glove was much worse.

“I’m a defensive player. That’s what I bring most to this team, and to every team that I’ve been on since I started out my career,” Nwaba had told The Post.