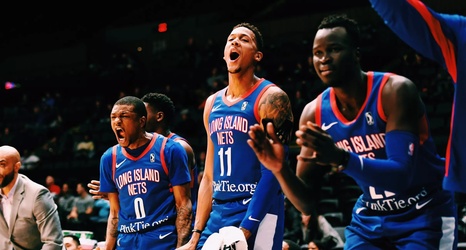 The Long Island Nets raised their 2019 Eastern Conference championship banner at Nassau Coliseum, but despite that and the debut of their two two-way players —and a surprise performance by C.J. Massinburg, the Nets affiliate lost to the Delaware Blue Coats, 152-137, in a high scoring showdown.

It was Long Island’s second straight home loss and their record stands at 1-2.

Despite the loss, Henry Elenson and Timothe Luwawu-Cabarrot, the Nets two-way players, had good debuts for Long Island. Ellenson recorded 18 points and nine rebounds in 30 minutes while Luwawu-Cabarrot tallied 16 points, three rebounds, and two assists in the loss.