Liberty coach Walt Hopkins: He didn’t start the fire but he’s learning how to manage it 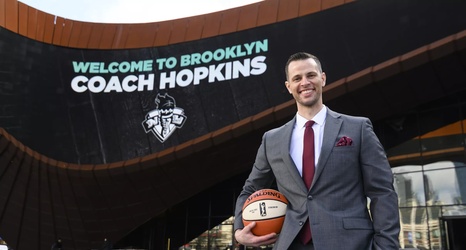 The Liberty’s new head coach, Walt Hopkins, is seen as a 34-year-old hoops wunderkind but like seven of his 12 players, he’s a rookie. And as Barbara Barker of Newsday notes in a feature on Hopkins, he’s not just a rookie, he’s a decade younger than any of the WNBA’s 11 other head coaches. And even that’s not the only thing that sets him apart.

In the Liberty’s rebuild, Hopkins will face a number of challenges. The WNBA team will have seven rookies on its 12-woman roster. Then, there’s the challenge of playing a shortened, 22-game season at IMG Academy in Bradenton, Florida.