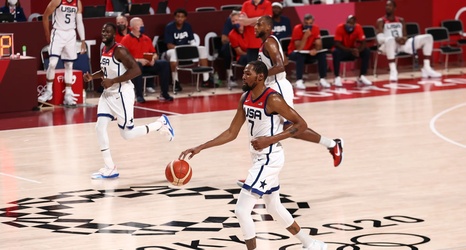 It was a tremendous performance from Kevin Durant with some history thrown in as KD led Team USA to the knockout stage at the Tokyo Olympic Games.

Team USA defeated the Czech Republic, 119-84, on Saturday to advance to the quarterfinals behind hot shooting and forceful defense, both of which were supplied by Durant. The victory puts the U.S. at 2-1 in Group A play, which translated to a punched ticket to the quarterfinals.

While Jayson Tatum may have led the way with his best shooting performance of the Olympics — 27 points on 10-of-16 shooting from the field and 5-of-10 from three in 24 minutes off the bench, the night belonged to Durant.