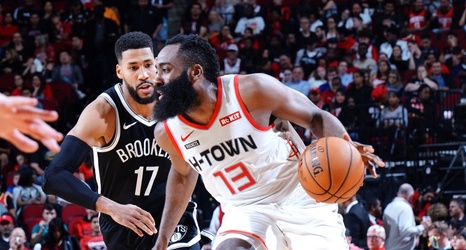 HOUSTON – Arguably the Nets’ most impressive comeback in recent memory came almost exactly a year ago in Houston. They fell just short of an encore Saturday night.

After a first quarter that saw them trailing by nearly two dozen and James Harden on pace to crack triple digits, the Nets rallied all the way back to lead about midway through the fourth. But they couldn’t hold it, falling 108-98 at Toyota Center.

After trailing by as much as 22, the Nets fought back to go ahead 90-89 on a DeAndre Jordan tip-in with 8:55 left. Theo Pinson put the Nets up 92-91, but Harden’s floater with 6:51 to play sparked eight unanswered Houston points to put the game away.