In the world of sneakers, Kyrie Irving reigns supreme 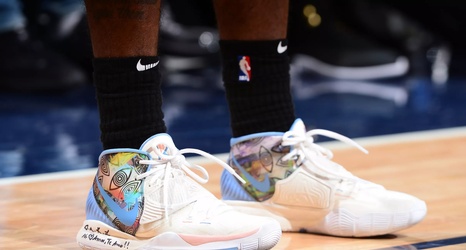 On Saturday, Kyrie Irving posted a video on his social media, offering his thoughts on his latest sneaker, the Kyrie 6. It wasn’t a sales pitch as much as it was an explanation of what he feels the shoe represents.

To say Irving puts a lot into his Nike brand sneakers would be an understatement. So would saying his line has been a success.

As Alex Schiffer pointed out in a feature this week, Irving is leading designer and sneaker guru. And it’s working. His latest is being worn by some of the league’s top players: stars like Luka Doncic, Ja Morant and Jrue Holiday as well as players with lesser followings, like Bobby Portis.