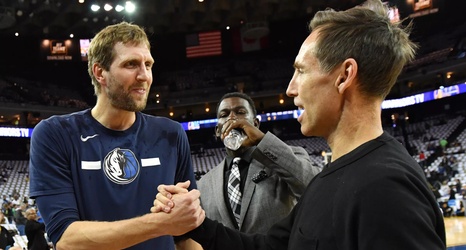 Dirk Nowitzki and Steve Nash have long been best buds, even after Mark Cuban traded Nash to the Suns in what he admits was his worst move of his tenure as Mavericks owner.

As the Dallas Morning News points out, the two have a history of jousting...

So, no surprise, the future Hall of Famer believes his Hall of Fame friend will do quite well —and have a good time — as Nets head coach.

“That’s going to be a lot of fun [for Nash] and it’s a lot of challenges, but I think he’s up for it,” Nowitzki told Brad Townsend of the News.