Clarity on the James Harden ‘situation?’ Fugget About It! 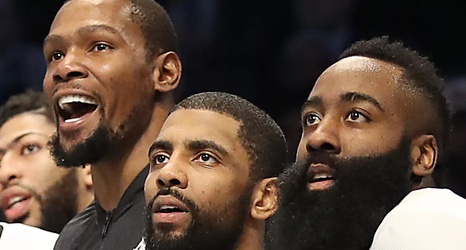 If you were looking for clarity on the James Harden “situation” Tuesday, you were out of luck. Kevin Durant denied recruiting Harden while a YES Network analyst said Harden has demanded a trade to Brooklyn ... but suggested that the only way he thinks a deal goes down if it’s Harden for Kyrie Irving.

Meanwhile, Jon Feigen, the Houston Chronicle’s Rocket beat writer, threw cold water on the possibility that the Rockets would trade the NBA’s top scorer this year at all, which mirrors what Shams Charania had told the “Load Management” podcast on Complex.com.

KD strongly denied recruiting Harden and even accused reporters of making up the story.