Bruce Brown’s timing on the court is impeccable ... and maybe off the court too. 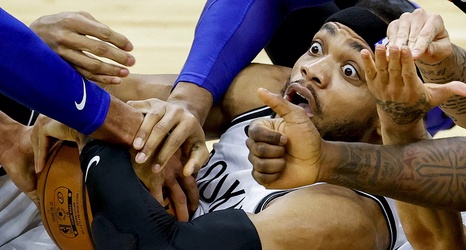 Monday is the first day that the Nets and Bruce Brown’s representatives can talk about extending the 24-year-old’s contract beyond this season.

On Saturday night, Brown scored 18 points and grabbed seven rebounds in Brooklyn’s nationally television game vs. the Warriors in San Francisco. No doubt his best game with the Nets ... and it came with a twist.

The 6’4” Brown, who has a 6’9” wingspan, played the 5 for the Nets! DeAndre Jordan was out for personal reasons and Kevin Durant was the 4 ... and the Nets small ball lineup played what more than one pundit —and fan— called beautiful small ball.